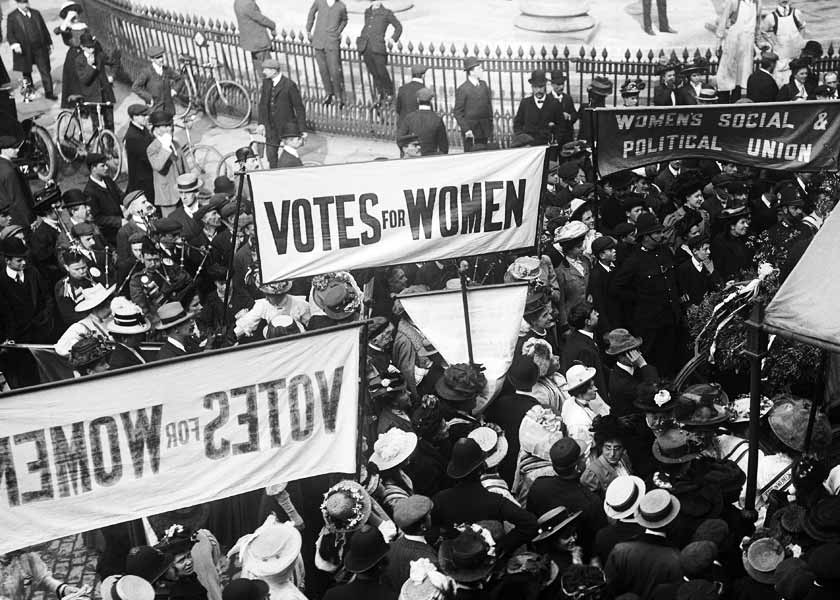 International Women’s Day is on March 8th (this Friday!) Last year’s celebration was a big event, with parades and demonstrations across the globe. Let's stand together in this important time in history to do everything possible to help forge a more gender-balanced world! We've come a long way, yet there's still more to be achieved.

This year's International Women's Day is a call-to-action for driving gender balance across the world. Gals, let's stand together to readdress the #BalanceforBetter

Here's a look back at a few of our International Women's Week Icons who worked tirelessly to establish a better gender balance...

Political activist born in here in Manchester. Emmeline Pankhurst dedicated her life to gain women the right to vote by heading the Suffragette movement and changed our lives.

The suffragettes succeeded in winning the initial right to vote (for women over 30, 21 for men) by 1918 after the first world war. It wasn’t until 10 years later after Emmeline had passed, women of the late '20s were granted voting rights at 21 (18 for men).

The suffragettes were fearless in their determination to win women equal voting rights to men and how grateful we all are.

An incredibly inspiring woman who gave to us the LBD ‘Little Black Dress’, ‘Chanel no.5’, the ‘Chanel suit’ and the ‘2.55’ quilted bag. World-renowned iconic French fashion designer and business woman, Gabrielle “Coco” Chanel’s designs have changed how we wear our clothes today.

She freed women from the corset by her invention of the ‘Classic & Casual’ styling with use of her hallmark monochrome and pearls.

In the '30s during the height of Coco’s fame she employed 4 thousand workers and owned 5 boutiques.

In the words of Coco ‘Fashion fades only style remains.’

Jackson Pollock, Jacob Esptein, Isamu Noguchi are just a few of the artists American publicist Eleanor Lambert had to her repertoire.

With a love for both Art and Design Eleanor believed fashion to be an art form and that fashion could be a credible industry. During the 1940s, Eleanor worked to promote American designers to give American fashion it’s international presence.

Her incredible achievements included to co-founding MoMa, New York Fashion week, the Council of Fashion Designers of America, the Met Gala and the International Best Dressed List. What a woman!

“Queen of Jazz”, “The first Lady of Song”, “Lady Ella” Ella Fitzgerald was American Jazz vocalist remembered for her gorgeous tone of voice and innovative scat singing style. She was the most celebrated jazz singer of her generation.

Described as being ‘painfully shy’ she faced her fears for the love of doing what she loved through a time when being both an African - American and a woman were not easy to say the least.

Ella was the first African-American woman to win a Grammy in 1959 and went on to win 13 more Grammys, 20 Grammy nominations, recorded over 200 albums and sold over 40 million records. Beautifully done Ella.

It isn't where you came from, its where you're going that counts

She worked alongside her husband to spread the message world-wide speaking out against discrimination, environmental & economic injustice. Including equal rights for all women, children, gay, lesbian, poor, homeless people; their message was better treatment for everybody!

After her husband’s death she worked tirelessly and developed her own career in activism to finish what her husband ultimately gave his life for.

Because his task was not finished, I felt that I must re-dedicate myself to the completion of his work.

“Mother of Feminism” American Journalist, writer, feminist and social political activist Gloria Steinem became known for her leadership of the American feminism movement of the '60s and '70s. She still, continues to actively support equality for women today.

Gloria co-founded feminist Ms Magazine and was part of many female led groups.

She spent her life on the road, travelling to connect and listen to the voices of people, “putting herself into reality and out of denial.” Their stories and ideas would spark change and revolution for equality which became a worldwide movement for liberation.

The road is messy in the way that real life is messy.

Wangari Maathai has so many achievements that make her an amazingly inspiring woman.

A Biological Science and Master of Science graduate, Wangari was the first woman in East and central Africa to be awarded a doctorate degree.

together, women are powerful

Professor Maathai was a Kenyan environmental political activist and the co-founder of the Green Belt Movement which was a grassroots campaign for sustainable development which led to the planting of over 30 million trees across African countries.

Her efforts were greatly rewarded with a Nobel Peace Prize (for ‘contribution to sustainable development, democracy and peace.’) in 2004, she was the first African woman to do so.

You can get your 'Women Power' Pankhurst Tee ahead of the big day. 10% of proceeds go to supporting The Pankhurst Trust an amazing women's charity close to our hearts.