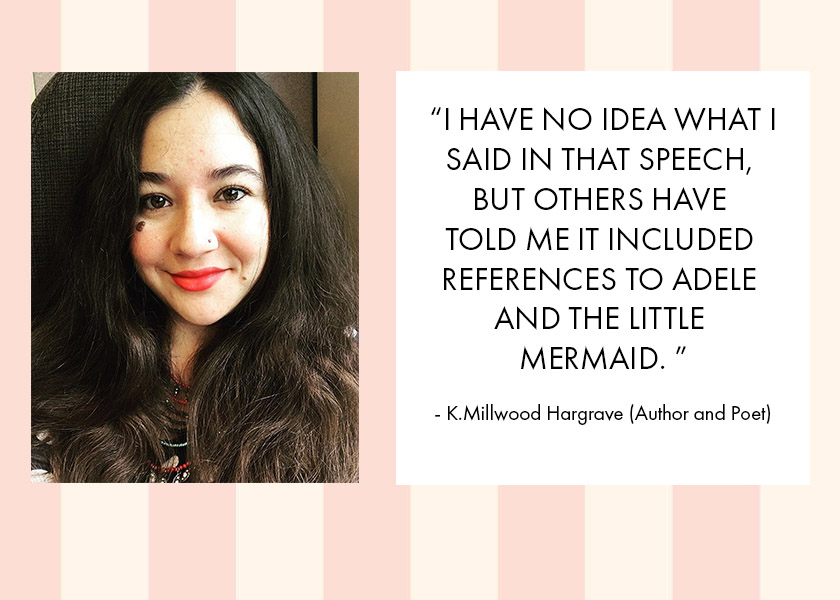 A Cup of Tea with Joanie and... Kiran Millwood Hargrave

I'm a poet and author of children's books, including the award-winning The Girl of Ink & Stars, and The Island at the End of Everything.

I usually wake up between 7.30am and 8.30am, depending on how insistent our cat, Luna, is for breakfast. She's a rescue who was in very bad shape when she came to us, and so at the beginning we were a little too indulgent - she's wake us at 4.30am everyday! But we've become stricter and now she's more secure in her routine. She's a perfect alarm clock. My usual breakfast is a banana if I'm on my own, but if my friend and fellow write Daisy is coming over for a writing day, we'll treat ourselves to eggs and avocado.

Working hard and being lucky! Talent and timing are both equally important factors in becoming a published author. If my agent hasn't been looking for a story like mine when I sent it to her... if my publisher had already signed a story like it that year... there a lot of 'what-ifs' and it makes me all the more grateful that this is my job.

Being a write wasn't a childhood dream of mine - I was quite being a reader - but when I was nineteen I met my now-husband Tom de Freston a successful artist, I realised your passion could become your career. Stories are my favourite thing in the world, be they in books or films or people's mouths, and when I attempted writing my own, starting with poetry before beginning a novel [what became my first story for children, The Girl of Ink & Stars] it felt like the most natural thing in the world. That's not to say it's easy! Like love, it's hard work, but it's worth it.

My most memorable work moment is...

Has to be winning the Waterstones Children's Book Prize 2017. It would have been a wonderful night even if I hadn't: I got to meet so many writing heroes and catch up with author friends. It's a cliché, but I was not expecting to win, to the extent that I hadn't washed my hair or painted my nails - usually these are rituals when I'm having a night out of any kind - but it just didn't cross my mind that I would be on stage having my photo taken. Thank goodness I had red lipstick with me.

When they announced me as category winner I cried and cried, and forgot to thank Waterstones. Then when it was announced I'd won the overall prize as well, I went into total shock. I have no idea what I said in that speech, but others have told me it included references to Adele and The Little Mermaid. I know I made sure 'Thank you Waterstones' was the first thing out my mouth: after that I was just trying to not cry again. I was marrying Tom in a month to the day of the ceremony, with the British Book Awards a week after our wedding, so it was very overwhelming, wonderful time. I might have peaked already.

What do you enjoy after work?

Sitting on the sofa with Tom watching Netflix, with Luna on my lap and a gin and tonic in hand. Though if I'm in the grip of a draft, the story doesn't leave me until it's all down on paper. There are weeks when there is no 'after work': the work is all there is. It becomes an obsession.

Depending on mood, or price, I love an Old Fashioned, or a gin martini - very dry, very dirty

What can you not leave the house without?

Red lipstick and a book

In your wardrobe, what item can you not live without?

Any one of my vintage-style circle-skirt dresses. I have them in various prints so hopefully people don't notice I basically have ten of the same style dress. It would have to be a sleeved one, as I'm only allowed one item and wouldn't be able to pair it with my favourite mustard cardie (from Joanie, of course!)

You're given a plane ticket titled 'anywhere', where would you go?

Cuba. The countryside looks beautiful and Havana seems to still have its soul. I love colourful, vibrant places where music matters, especially when they have a good rum.

I think of them as daemons, as His Dark Materials was such a formative book for me. I'd like to think it's an otter: happiest in water, loyal, and fierce when needed.

It's a toss-up between His Dark Materials by Phillip Pullman and One Hundred and One Hundred Years Of Solitude by Gabriel Garcia Marquez. Both books I arrived at at a formative time - the former just as I went to secondary school, the latter just as I fell in love for the first time. I've re-read them dozens of times and each time they reveal themselves as different and vital, with something new to say.