Sour Heart is a debut collection of short stories, published by the talented Jenny Zhang. Joanie HQ were delighted to be invited to An Evening with Jenny Zhang at Waterstones in celebration of this collection. At the event we were able to drag Jenny away from her busy schedule and ask her a few little questions. Read on to find out more about the collection and Jenny herself. 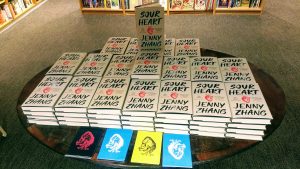 Jenny Zhang was born in Shanghai and raised in New York. She is the author of a poetry collection, Dear Jenny, We Are All Find, and a collection of poems and essays, The Selected Jenny Zhang. She was nominated for a National Magazine Award for her essay in Poetry magazine, and her writing has also appeared in the New York Times magazine, New York magazine, Rookie, Lenny and BuzzFeed.

Sour Heart is centred on a community of immigrants who have traded their endangered lives as artists in China and Taiwan for the constant struggle of life at the poverty line in 1990s New York City, the seven stories that make up Sour Heart examine the many ways that family and history can weigh us down, but also lift us up.

From the young woman coming to terms with her grandmother's role in the Cultural Revolution, to the daughter struggling to understand where her family ends and she begins, to the girl discovering the power of her body to inspire and destroy, these vibrant, raw and powerful stories illuminate the complex and messy inner lives o f girls struggling to define themselves.

What inspired you to write the Sour Heart stories?

It’s difficult to trace inspiration, perhaps I need more magical ways of thinking about my own writing but I also fear thinking about it magically will take away from the actual magic writing imparts on my life. All that is to say, I just had bits and pieces of stories in my head, a girl’s voice would come to me, a line would appear in my brain and I’d write it down. My own experience of immigrating at a young age was unforgettable in so many ways. To be split so young is terrifying but in some ways, magical too. It was magic to step off the plane and see that the same moon I knew in Shanghai was there in New York.

We found it very moving that Sour Heart is narrated by young girls. Mainly because these girls wouldn’t have been given a voice at the time. Was it important to you to give these girls a voice and a focus?

I didn’t necessarily think about what was important, perhaps because when you’re writing as a young writer, you don’t necessarily think anyone other than your friends or perhaps teachers and classmates will ever read what you write. I just knew that young girls have so much to say and I was interested in what they had to say. I knew there was complexity, nuance, humor, and perhaps even wisdom to be gleaned from going deeply into a young girl’s experience.

Helplessly, Christina is our most loved character. Her love for her parents is so strong. Who was yours?

Aw, that is sweet. I love Christina too because she is so devoted to her parents, and because on the other side of feeling like you were born to the most amazing family is the pain of fearing you may lose them, or the pain of realizing they aren’t perfect, that their flaws can harm you. I’m sort of partial to Mande, the character in the story “My Days and Nights of Terror” because she’s so small and forgettable and seems so easy to intimidate and control, but inside she is large, inside she is struggling to be seen for who she is, inside she just wants someone to let her have the freedom to make mistakes, the freedom to not know, and the freedom to try.

If you could meet any literary character, who would it be, and why?

This is difficult to answer and all the people I want to meet are teens so it might be creepy to actually do it, but I’d love to meet Claudia from the The Babysitter’s Club and eat Cheetos with her.

What’s the most important book you’ve ever read?

There’s too many to choose from! I will say that Frank O’ Hara’s poems have meant a lot to me in my life because he had a heart and he was brilliant and he had deep wells of sadness in him, and deep wells of compassion, but he was also funny, and joyous, and flippant too.

What item of clothes could you not live without in your wardrobe?

I’d like to think I can live without anything but right now, I love this pair of fuzzy, leafy, wide leg pants because it makes me feel very… I don’t know… fun, like someone who would do cartwheels at a party.

You’re given a plane ticket titled ‘anywhere’, where would you go?

I’d go to Shanghai and see my relatives, because I’ll take any opportunity to do so.

What would your spirit animal be, and why?

I don’t think I have one… human beings are already such wild animals!

If you had the chance, what advice would you share with your 16-year-old-self?

Don’t seek validation from others… it’s a never ending trap that becomes more and more difficult to bear.