An Interview with Louise Pentland: Author of Wilde About The Girl

We're big fans of blogger-turned-author, Louise Pentland here at Joanie! We were lucky enough to catch-up with this gorgeous Joanie Gal to talk about her bestselling book, Wilde About The Girl, as well as chatting vlogging, family and The Royals!

We'Re big fans of your first book, ‘Wilde Like Me’ - at what point did you decide to write the sequel, 'wilde about the girl'?

I wish I had a really romantic and compelling answer for this but actually it’s far more bland, haha! When I joined the Bonnier Zaffre family (that’s my publishing house), I signed a two-book deal. So, right from the start there were always going to be two books. In my initial meeting my Editor, I told her about a really significant thing I wanted to happen in Wilde About The Girl (THE sad thing – if you’ve read it, you’ll know) and she was fully on board. So, Wilde About The Girl has been around as long as Wilde Like Me.

In your CAREER, you face a lot of input from your fans and followers… but who WOULD YOU SAY is your biggest critic?

By far and above myself. I’ve been really open about this on my YouTube channels but I have some pretty intense issues around not really feeling good enough - I think a lot of us do. I was raised to believe I should always be trying harder and sometimes (well, quite often), I don’t really know where to stop. One of my resolutions for 2019 is to accept that good enough is good enough and believe in myself more. Sometimes I read things about what I’ve done in the last few years and think, ‘blimey that’s pretty impressive’ but it’s hard to let that feeling sink in.

It’s always really cathartic to read my followers' comments because they are so joy-filled and it reminds me that I’m doing okay.

We love watching your weekly vlogs and seeing how dedicated you are to being a great mum. with such a busy home life, how do you manage to get into your writing zone?

Aha thank you! The juggle struggle is real! It’s taken me a few years to find my writing zone and for a long time, the only thing for it was just forcing myself to sit down and write. It has helped in the past to go to my gym café (literally the only place in the gym I ever go, haha), switch my WiFi off and just blitz it but lately I’ve found a new technique; it might sound a bit brutal but it works wonders.

I set my alarm for 5am and for two hours, I just write in absolute peace. The children are still asleep, nobody is phoning/texting/emailing/carrier-pigeoning, it’s bliss. My mind feels ultra fresh, I haven’t yet polluted it with endless scrolling through my phone and my best ideas flow. I’m currently writing the third in the Wilde series, and I absolutely love it. 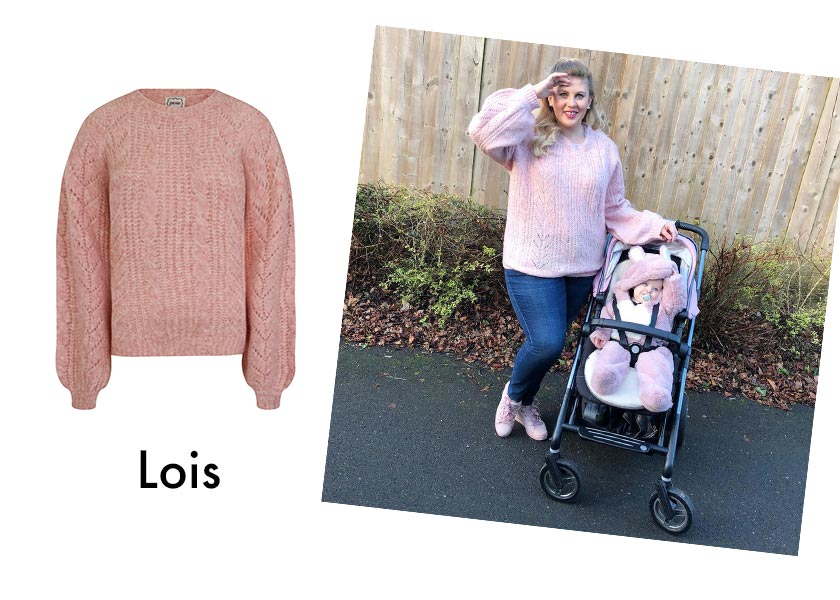 Who is your favourite author right now and why?

I’m currently reading Becoming by Michelle Obama and it’s such an inspiring book. A lot of people think Michelle was just a badass First Lady but no no, she was a badass lady before she met her husband. In fact, she was his mentor- that’s how they met! I love that.

We’ve seen that you recently met the royal family and that you are now Lady Louise Pentland! If you became queen, what would be the first thing you would put in place?

If I were Queen, and also had full powers over the government and national budget, I would offer FREE childcare to all children 0-3. Pre-school childcare is so expensive and out of reach for most families. It’s often more economical for the woman (who statistically earns less than her bf/husband - yay gender pay gap) to stay at home with baby than it is to go back to work and spend all her wages on childcare. If women were given a few days a week to have their life and mind back, the world would be a much better place. I think the economy would boom because women are an asset to the workforce, maternal mental health would improve because women wouldn’t feel as isolated and babies would enjoy being social and developing in different experiences. It wouldn’t be mandatory but just an offer for families.

Got a bit serious there!

We know that Robin Wilde, like yourself, is a go-getter. in your wardrobe, which piece of clothing do you feel your most powerful/motivated in?

I’ve basically spent the last three months in a little black cord skirt I bought from you guys actually! You can tuck nice tops in and wear it with tights (which I hate but think I look nice in) and skip about feeling quite peppy. A bit of pep in your step leads to a lot of good things.

Robin Wilde is a big fan of jeans with a bit of stretch and a good pair of converse – she’d definitely take comfort over tights! 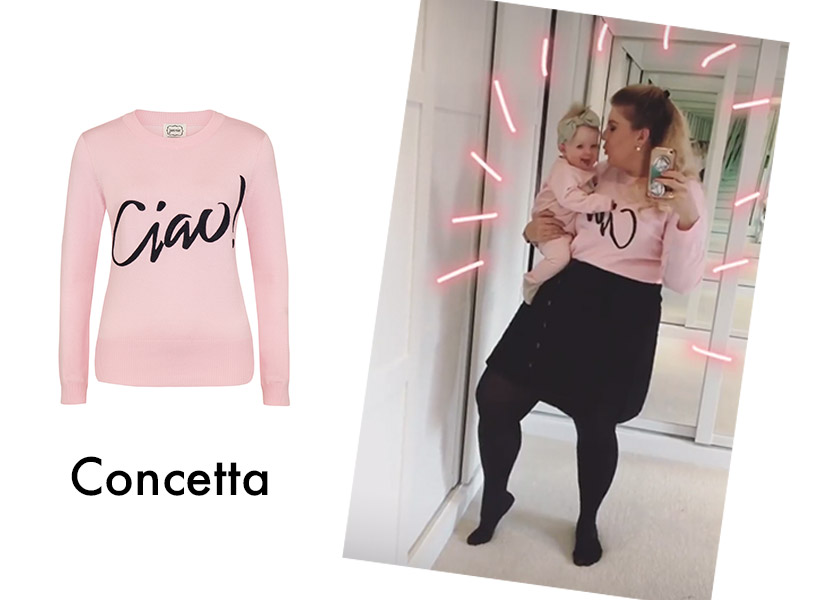 ‘Wilde About The Girl’ really takes the reader on an emotional journey. Out of all the books you’ve read, which has touched you the most?

A book that has stayed with me for years and years and is a bit ‘out there’. It’s called ‘Angels In My Hair’ and is about an Irish lady who has a deep connection with spirits and, surprise surprise, angels. She talks about her childhood experiences of loss and friendship and then how her angels guide her through adulthood.

It made me think about whether there could be angels in my day-to-day life and it opened my mind to considering there might be more to life than just what we can see.

If anyone in Wilde About The Girl was ever going to love that book it would be Storie and potentially Kath - though under all that crochet and pompom trim, she’s quite practical so maybe just Storie!

If your books were ever to hit the big screen, which actors would you want to play Robin, Lyla, Lacey and Auntie Kath?

This is a question I get asked so often and I’m afraid I never have an answer! I told a friend of mine who I went to uni with about how I’m always asked this and she made me promise that if it was ever picked up by Hollywood that she could play Robin. So, my answer is officially, Jessica Stock, haha. You can follow her on Insta - @not_just_a_tit, she’s funny. 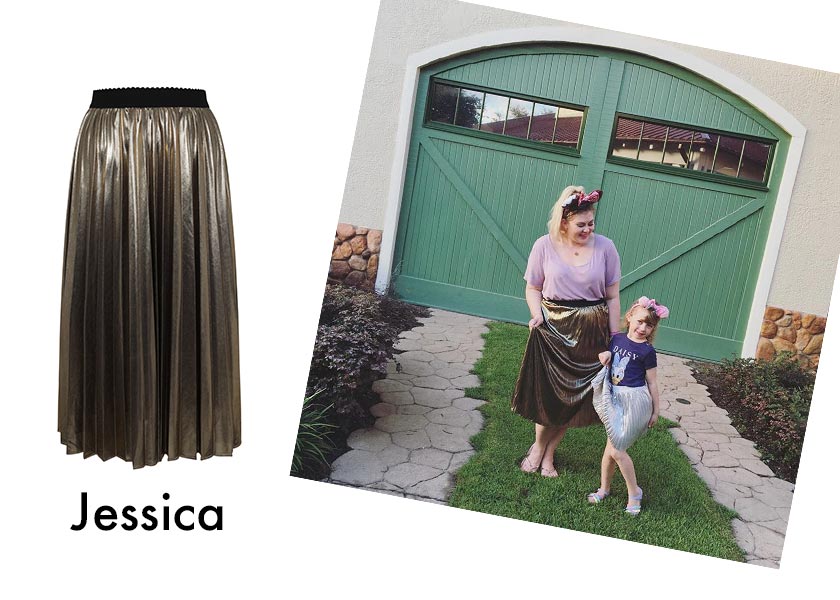 The Jessica skirt - also available in other colours.

If you could write a book in any other genre, which genre would it be and why?

I really want to write children’s books from Lyla’s perspective because I think she has so much going on around her and is such a switched on little girl that being inside her brain would be magical.

Finally, being a mum to two girls yourself, what is the biggest piece of advice you would give to gals growing up in the digital world? 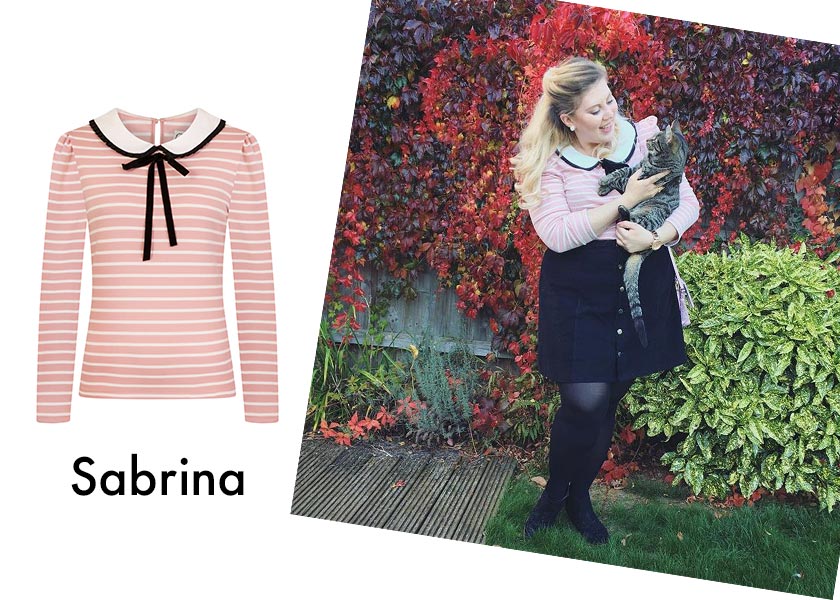 The Sabrina top - also available in other colours.

You can shop all Louise's looks over at www.joanieclothing.com and be sure (if you haven't already) to check out Louise's Youtube and Instagram channels.

You can also buy or find out more about 'Wilde About The Girl', here.