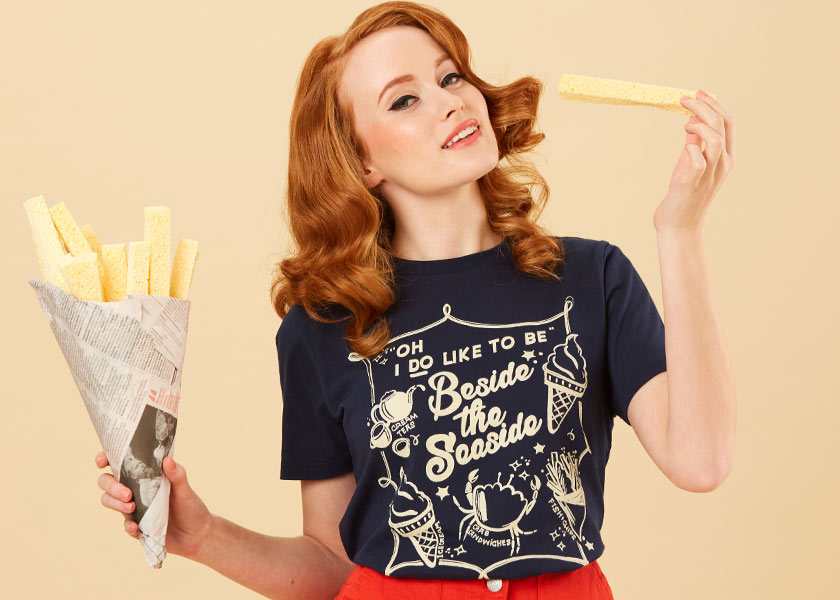 The History Of Nautical Fashion

Hop aboard everyone, it's time to look shipshape! To mark the launch of our new nautical-inspired pieces that are making a splash this season, we wanted to take a look back at the history of nautical fashion. The love for nautical fashion is yet to dry up, so how and when did this seafaring style love affair first appear on the horizon? read on to find out...

Though the navy existed hundreds of years before, it wasn't until the 18th century that a standardised uniform was introduced amongst members of the Royal Navy. The uniform utilised a colour palette of blue and white with gold or silver accents, providing the origins for the term 'navy blue'. This recognisable colour scheme has continued into contemporary fashion, with many garments originally considered sailor's clothing becoming classic wardrobe staples, such as the Breton shirt or Peacoat. The navy uniform always centred around the principles of simplicity and practicality, as any clothing worn by members of the Royal Navy had to be functional above anything else.

The Start Of Sailor Style

A majorly influencing factor in bringing nautical fashion as an inspiration to the masses came in 1846, whereupon sailing around the Channel Islands Queen Victoria dressed her 4 year-old son Albert Edward in a specially made miniature sailor's suit. A portrait of Albert was then commissioned, and when displayed at St James's Palace the picture was seen by over 100,000 members of the public, stimulating an interest in nautical leisurewear which would last for much of the century. Military styles and details then began infiltrating civilian fashion, as replicating the style of the Royal Navy was associated with status and respectability, and eventually became a mark of solidarity during the First World War. It was during the World Wars that military details such as stripes were commonly added to women's wear whilst their men were away.

Did you know? Stripes were supposedly used within maritime clothing because they make a man overboard more visible.

The iconic Coco Chanel was also a major catalyst in the continuation of nautical fashion. In 1917, Chanel began selling a jersey version of the striped Breton top, pairing it with wide-legged trousers and a thick belt, and during the 1920s, she was often spotted wearing striped sweaters and bell-bottom style 'yachting pants' on the bohemian French Riviera, undoubtedly increasing the popularity of the style and introducing the Breton marinière into the luxury sector.

In 1931, a Vogue cover featured a nautical fashion illustration, picturing a woman at a ship's wheel, wearing bell-bottom trousers and a striped top, items which are still worn in present day.

Many other designers have also taken inspiration from nautical fashion to create their collections, including Yves Saint Laurent and Vivienne Westwood. In 1962 Yves Saint Laurent brought the naval collar to the catwalk, and in 1981 Westwood chose the theme of 'pirates' for her Spring collection, which featured the original colour palette, plenty of stripes and nautical imagery such as anchors.

From here onwards, nautical fashion still has a place in our hearts and our wardrobes... which nautical inspired items do you own?