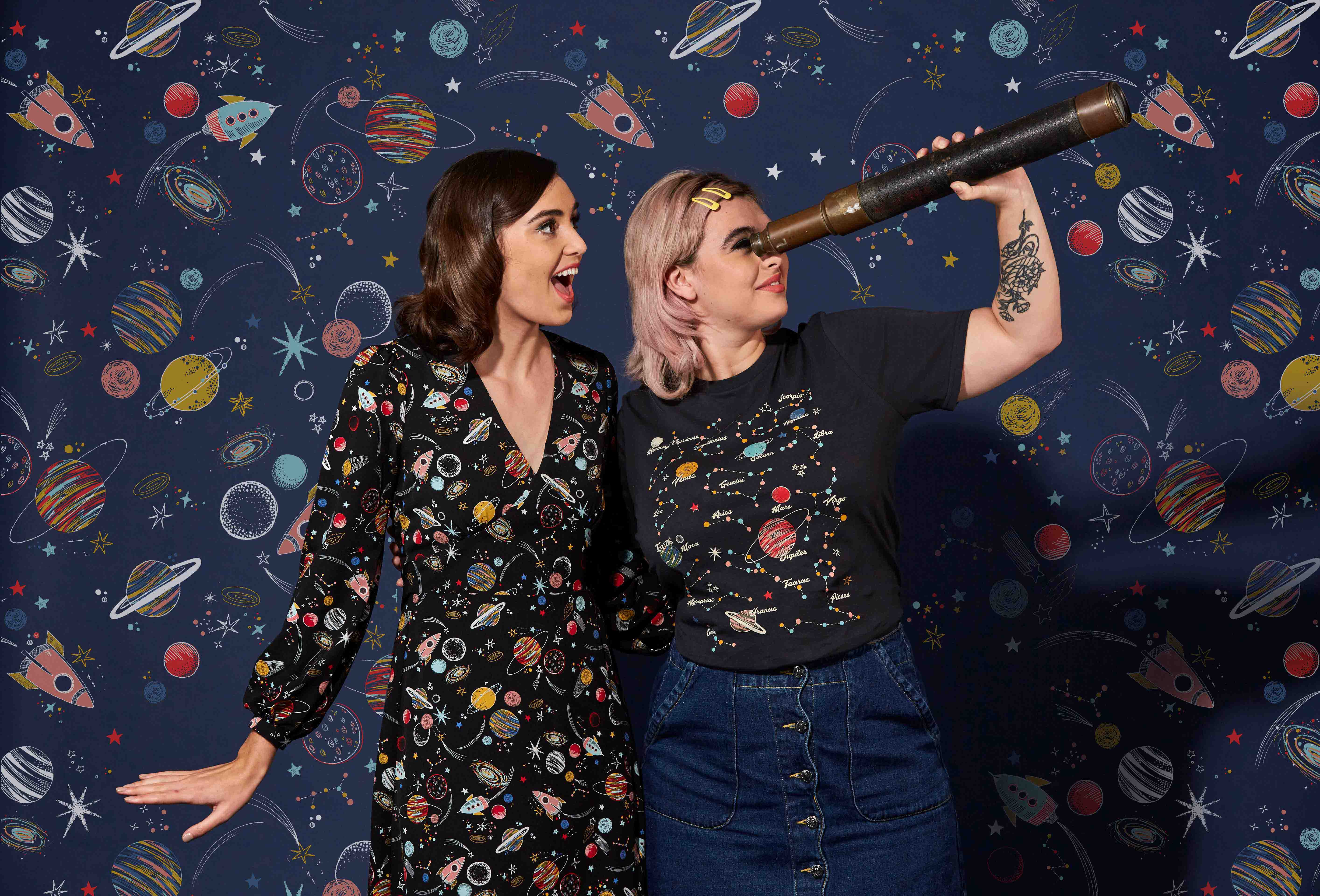 The History Of Space-Inspired Style

We're blasting off into the new decade with a fresh collection landing that is guaranteed to leave you with stars in your eyes! To mark the launch of our new collection, we thought we'd take a look back at the history of space-inspired style. We're looking back to that 1960s Moon landing and taking you on a cosmic fashion voyage through to present day. Prepare for lift off...

The evolution of space-age fashion dates back to the 1960s, an era close to our hearts here at Joanie. Way back on the 20th of July in 1969, NASA astronauts Neil Armstrong, Edwin “Buzz” Aldrin and Michael Collins completed the hotly anticipated Apollo 11 mission. The world watched as Armstrong took that infamous space walk on the moon’s surface, declaring...

“That’s one small step for man, one giant leap for mankind.”

The 1960s Moon landing inspired films, music and major fashion designers to create futurist, space-inspired style for the runways. Since the days of the Moon landing, designers like André Courrèges, Paco Rabanne, Pierre Cardin, Hussein Chalayan have attempted to create fashion of the future.

The Moon landing was the perfect stimulus for Designer Paco Rabanne. The innovative materials being developed in the 1960s meant designers could create avant-garde collections that were focused on how the future could look. Rabanne used a variety of materials from paper to metal, meaning designs often resembled metallic space-age armour. Iconic 1968 sci-fi film Barbarella featured Rabanne's metallic creations. Since the film, fashion magazines, celebrities and films have recreated the iconic Barbarella look.

The 1980s was a time of glitz, glamour and excess. In fashion, the late 1970s and the dawn of the 1980s was a particularly outer space-focused time for fashion designer Thierry Mugler. His Autumn/ Winter 1979 collection, looked both backwards and forwards, recreating classic 1960s futurism combined with forward-thinking 1980s decadence.

Millennium Bug And Beyond

The 1990s was a time of major technological development, from computer technology, the dot.com boom and beyond. With the year 2000 looming all eyes were on the Millennium. Fashion Designer Alexander McQueen took inspiration from space-age technology to create a futuristic look for Givenchy at their 1999 Autumn/ Winter Catwalk Show. Inspired by the 1982 film Tron, his collection was packed with futuristic style staples from LED lights to glow-in-the-dark prints. Futuristic Space-Age style continued well into the the 2000's with Designer Hussain Chalayan creating the famous bubble dress and designs that challenged what we might wear in a future Universe, with dresses that changed shape as the models walked the catwalk.

The fascination with the cosmos continues to present day. The new Joanie Collection harks back to silhouettes of the 1960s, featuring intergalactic all-over prints. The Nichelle Tee features the astrological star signs as a graphic print. Our classic Sharman Jumper named after British Astronaut Helen Sharman, is reminiscent of naive vintage intarsia jumpers with a slogan that reads 'Fly me to the Moon' from the famous Doris Day song.

We're very excited for all that the new decade holds. Keep your eyes peeled for new space-age styles landing soon!