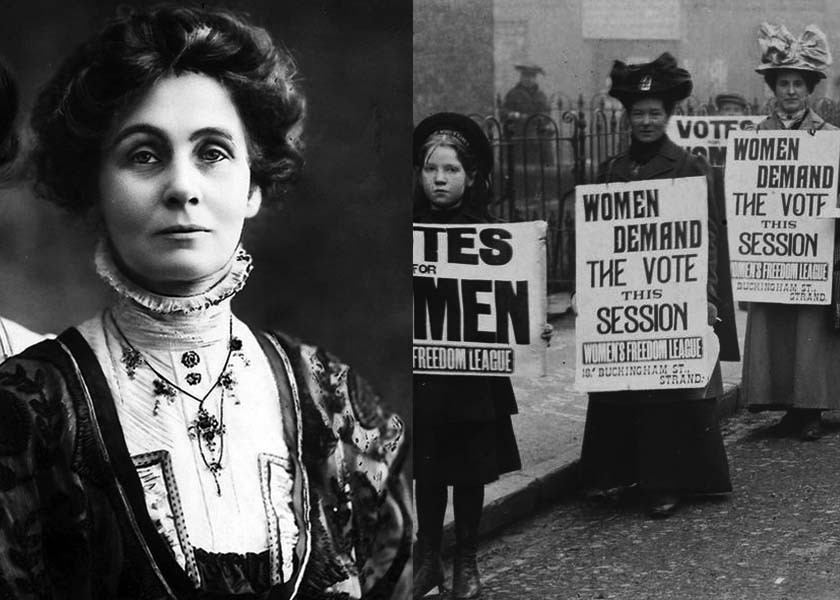 An Interview with Tessa Chynoweth: Curator at The Pankhurst Trust

Ahead of International Women's Day on Friday 8th March and in celebration of our collaboration with The Pankhurst Trust on our first charity T-shirt, we interview Tessa Chynoweth - Curator at The Pankhurst Centre.

We chat to Tessa about her role at The Pankhurst Trust, acting as Curator at the iconic Pankhurst Centre, as well as the issues that modern women face.

Hi Tessa, as Curator at The Pankhurst Trust, could you tell us a little more about your role at the charity and how you got into this profession?

My role was created at the beginning of 2018, as part of the celebrations of the centenary of some women finally winning the right to vote. I was appointed to manage a collection and curatorial project called Centenary City and a youth engagement project, called Rise Voice Vote (more information about Pankhurst projects available here.) The role has developed since then to include care of the collection and advising about how we can develop our little museum into the world-class radical heritage site it deserves to be!

I am a historian by training, with a fascination for women’s stories, domestic spaces, and the power of everyday protest and resistance. After finishing my PhD, I did a variety of other jobs working with museum collections, which led me here, to The Pankhurst Centre, the birthplace of Suffragettes, which was the story that got me hooked on history at school in the first place!

The Pankhurst Centre is the headquarters of Manchester Women’s Aid, helping those suffering domestic violence and abuse, as well as the historic former home of the Pankhurst family, who were instrumental in the Suffragette Movement – what do you feel are the most important purposes that the Centre serves today?

We’re a very unique organisation! I can’t think of another example of a women’s services operating from a site of such importance to the women’s movement, or of another museum or heritage site which also offers services for women. For us, the two parts of the Trust are mutually reinforcing, both serving to promote the equality of women.  Manchester Women’s Aid provides vital services so that domestic abuse survivors can live free from the fear of domestic violence and abuse. We manage women’s refuges, and run group work and outreach programmes to challenge the behaviours associated with domestic abuse. Sadly, our work also demonstrates just how far we’re got to go to challenge inequality . Domestic abuse is still very much a gendered crime, with women at least twice as likely to experience it as men. [1]

The Pankhurst Centre, as the home of the Pankhurst family and the birthplace of the Suffragette movement, is also vitally important to the Trust. The Pankhurst women are some of the most famous campaigners for women’s rights in history, and the fact that the movement that changed the face of democratic politics, started in the parlour of this building is an inspiring reminder of what women can accomplish. Equally important, the museum documents just how hard that battle was won; stories of force-feeding and abuse of Suffragettes remind us how far we’ve come.

With International Women’s Day approaching and this year’s theme being #BalanceforBetter, we’d love to hear what that means to you and how The Pankhurst Trust are championing a better gender balance for the year ahead?

I can’t speak for Women’s Aid, but certainly for the Centre, the International Women’s Day theme of #BalanceforBetter is really important. Perhaps unsurprisingly given the history of the Pankhurst Centre, the focus has very much been on celebrating the triumphs of the Suffragettes, and the achievements of the Pankhurst women. What we’re starting to move towards now is a more balanced view – a recognition that as well as being the stars of the campaign for ‘Votes for Women’ these were real individuals, with complicated, changing views. BalanceforBetter reminds us that to acknowledge that fact is not to take away from the significance of the story, but to recognize that these were real people, shaped by the context in which they grew up. We hope in the future to be able to share a bit more of this story; of the differences of opinions between Emmeline and eldest daughter Christabel on the one hand, and middle-daughter Sylvia on the other, and the lesser-known stories of Adela and Harry, the Pankhurst’s youngest children, who are often overlooked. We also want to look outwards from the Pankhurst parlour, to investigate other stories of the campaign for the vote, and of female experiences in the early twentieth century.

Being little over 100 years since the first women in the UK were allowed to vote in a general election, how do you think suffrage campaigners would view women's equality as it is today?

The suffrage campaigners of the nineteenth and twentieth centuries had such different viewpoints, and such different hopes for what the vote would mean, that it’s difficult to answer this question! Even within the Pankhurst family, there were strong disagreements about this! We shouldn’t forget that some women had to wait until 1928, another ten years, to be able to cast their vote -  the 1918 Act only gave the vote to women over the age of 30 who met certain property qualifications.

There are certainly moments to celebrate in the last one hundred years; who knows what the suffrage campaigners would have made of our two female prime ministers, women’s liberation – the pill! Legal discriminations on women have undoubtedly rolled back since the vote was granted, but what’s proved more difficult to change is the centuries-old assumptions and stereotypes about gender that shape the way society works (Caroline Criado-Perez’s new books makes this fact abundantly clear!)I think we need to be very careful about seeing the last 100 years as a steady move towards the equality of women; societies develop in complex ways and not always in the ‘right’ direction– as recent political events across the world suggest!

In your opinion, what are the most pertinent issues that women face in modern society?

Far too difficult a question for me to answer, as women face such different issues! Inter-sectional feminism has proven just how important it is understand women not as a homogenous group who experience misogyny and sexism in the same way, but as individuals whose experiences of being female intersect with experiences of class, race, sexual identity, age as well as a variety of other identifiers. What’s clear is that we must work together to understand and raise these issues if we are to tackle them.

Perhaps one of the biggest challenges for those seeking to improve the position of women is actually the belief that women already have equality. We get a lot of comments like ‘women have got the vote, what more could you want?’ Although this belief is surprisingly widely held, it is demonstrably not true! This is part of the reason that we’re so pleased to be involved in the Greater Manchester 4 Women 2028 (#GM4women2028) scorecard, a collaboration dedicated to tracking the position of women in Greater Manchester over the next ten years over key areas including safety, employment, participation, education and culture.

Astonishingly, The Pankhurst Trust receives no public funding. How can people get involved in fundraising for the Trust and what are these funds used for?

All funds donated to the Trust go towards supporting women in need and preserving and developing the building where the Suffragette movement began. The Pankhurst Centre receives no public funding, and we’re so grateful for the dedication of our volunteers, and for donations from visitors and supporters which help make sure this important building stays open to the public. Please visit our website for ideas for fundraising and information about donating to the Trust, or follow us on social media and sign up to our mailing list to stay tuned and help support the Centre.