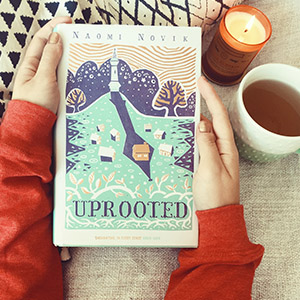 Welcome to Joanie's Open Book-Club @booksandcats! Kat is recommending Uprooted to the club this week. Uprooted (2015) is a high fantasy novel written by Naomi Novik. The book is standalone, unlike Novik's other fantasy series. Ellen DeGeneres is set to produce the film adaptation sometime in the future! Read on to find out what Kat thought...

"Uprooted is one of the most enchanting books I've ever read, forming a fantastic heroine from a mixture of Eastern European folklore and magical fairytale. It tells the story of Agnieszka, a girl from a small village bound by tradition to send a young girl away every ten years to a man known as the Dragon, who in return protects the village from the ominous power of the surrounding woods. As you fall deeper into the world that Novik has created, the vivid magic plays a secondary role to human conflict and how we perceive the world around us, as Agnieszka discovers that there is strength and beauty to be found in taking the path less trodden."

"This book has a cosy feeling of familiarity, like a darker, grown-up version of every story you were read as a child that has been patiently waiting for you to come home. It's the perfect warm tea, cold night, candles lit kind of book and I can't recommend it more!"